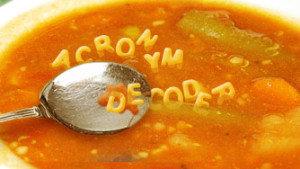 Personal finance is difficult enough as it is, but then throw in a bunch of acronyms, odd terms, and number-letter combinations and you have no idea what anyone is talking about when it comes to your investments, retirement, and future.

We want to give you a list of a few acronyms and their meanings so that you have a little bit of a better understanding when it comes to all of these fancy words people are throwing around; today, we are going to focus retirement accounts.

IRA – When it comes to retirement, IRA doesn’t stand for Irish Republican Army, but is instead of Individual Retirement Account/Annuity. An IRA is a retirement account that you open independently through an investment company. Individuals can save $5,500/year into one of these babies (subject to a few tax rules that you can read here), and if you are over age 50, you can save an extra $1,000.

myRA – This is a new one that you may hear pronounced as either Myra (like the name) or My-R-A; the “RA” again stands for retirement account. The myRA was first described in President Obama’s Address to the Nation in early 2014. The myRA is for individuals who do not have a retirement plan available through their employer; contributions are made to the account through direct deposit from the individual’s paycheck. The account follows the same contribution and taxation rules as a Roth IRA, but the account can only be used until the balance reaches $15,000 (including both contributions and earnings) or the account has been opened for 30 years, whichever comes first.

Maybe the most important thing to note about the myRA is that contributions can only made to a fund consisting of Treasury Bonds (much like the G Fund for those of you who know the TSP).

401(k), 403(b), 457 – Retirement accounts sponsored by a company or government organization for its employees. The letter-number combinations refer to the section of the IRS code that created these specific types of accounts. Through their paycheck, individuals can save a maximum of $18,000 (plus $6,000 if over age 50) pre-tax (similar to a traditional IRA).

These accounts are basically the same, with a few specific nuances that you can delve into further detail here, but the basic difference between them is that 401(k)’s are offered by private companies, 403(b)’s are operated by non-profits, school systems, and hospitals, and 457 plans are sponsored by local and state governments (including school systems) and the federal government (the TSP – or Thrift Savings Plan – is the federal government’s 457 plan).

Wasn’t that taste of Retirement Account Alphabet Soup great? I know that you had so much fun that you can’t wait to check us out next week when we go through some acronyms that the financial professionals use!