Millennials are aware of the sometimes severe limitations on their financial resources and utilize several strategies to help keep their personal finances under control, but the hard decisions to put money aside for the future or continue their education is taking less precedence over tightening their spending habits.  Over half 56% take pride in comparing prices before making purchases; 52% have cut down on entertainment expenses and 52% use coupons when shopping.

Other strategies include focusing purchases on what they need instead of what they want (40%); 35% have cut down on purchasing specialty coffees; 25% share housing expenses with roommates; 23% each say their parents or others are helping to pay their bills or they have moved back in with their parents; 23% of millennials say have purchased a car that uses gasoline efficiently; 22% are getting support from Federal or State programs such as food stamps.  Fifteen percent have stopped or reduced the amount they set aside for retirement; 14% have taken on a second job in order to make ends meet; 12% went back to school to get retrained into a career where jobs are available; 10% went back to school to finish their degree.

Education seems to influence some of these financial decisions.  Those who attend post-secondary school (34% verses 21%) are more likely to share living quarters with a roommate and acquire a second job (19% compared to 13%) in order to pay their bills.  Almost 30% of those with at least some college experience choose higher fuel-efficient cars.  Over two thirds (67%) of those with a Masters Degree say they compare prices before making purchases compared to only 20% of those with a high school diploma.

Differences among genders are seen in some areas of financial decision making such as paying off credit cards in full each month; men (52%) are much more likely to pay their bills in full compared to 38% of women.

Fifty-one percent of Millennials say they Favor an Automatic Individual Retirement Account (Auto-IRA) program where a certain percentage of their income would be automatically taken out of their check and placed in an IRA.  Only 17% Oppose this idea, but 32% are Not Sure how they feel.  Almost half (49%) of those who think that Social Security will not exist when they reach the age of 67 Favor Automatic Individual Retirement Accounts, 32% of those that believe Social Security will exist when they reach the age of 67, but the benefits will be much less than they are for today’s retirees, Favor Automatic Individual Retirement Accounts and 9% each of those that think Social Security will exist when they reach age 67 and the benefits will be about the same as they are today and those who are Not Sure about Social Security Favor Auto IRSs although this is not statistically significant.

A greater percentage, almost half (48%), of all female respondents doubt that Social Security will even exist when they reach age 67 compared to 39% of men.  About the same number (30% of woman and 33% of men) feel the program will exist, but the benefits will be less. Twice as many men (10%) as woman (5%) say benefits will remain the same and an equal amount (16% women and 17% men) are Not Sure. 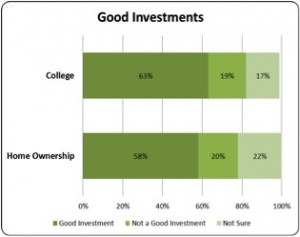 Five years after the fall in the housing market 58% of Millennials say owning a home is still a good investment.  The majority (50% – 78%) of older Millennials support home ownership, whereas 42% – 43% of 18 and 19 year olds give their support and 33% – 43% of these groups say they are Not Sure.  Eighteen percent of millennials say it is no longer a good investment and 16% admit they are Not Sure. This compares to 81% of the general public who said they believed buying a home in 2011 was the best long term investment.

Ever increasing cost of college tuition has also taken its toll on  attitudes toward education, but Millennials show slightly more optimism about investing in education.  Almost Two-thirds (63%) of Millennials say attending college continues to be a good investment. Predictably, the majority of those enrolled in post-secondary school (76%) and those who have attended post-secondary school are more likely to say college is a good investment.

In contrast, a 2011 report from the Pew Research Center says that less than half (43%) of the general public feel that the United States higher education program provides students with good value for their money.

Support for the Republican Party is slightly weaker among Millennials. About a quarter (26%), are Very Confident (9%) or Moderately Confident (17%) that Republicans in Congress can solve the financial issues, 26% are Somewhat Confident, 37% are Not At All Confident and 12% are Not Sure.

The analysis in this report is based on a national online representative sample of adults aged 18-32 in the United States. The survey was implemented in partnership with Toluna research (www.toluna-group.com). The online survey was conducted September 11-13, 2013. The representative sample included 618 completed surveys. The questionnaire was designed and hosted by the St. Norbert College Strategic Research Institute (www.snc.edu/sri) using Qualtrics software. Respondents for this survey were selected from among those who have registered to participate in Toluna’s online surveys and polls. The data have been weighted to reflect the age composition of the millennial generation. Because the sample is based on those who initially self-selected for participation in the Toluna rather than a pure probability sample, no estimates of sampling error can be calculated. All sample surveys and polls may be subject to multiple sources of error, including, but not limited to sampling error, coverage error, and measurement error.