These growing concerns are well founded as the “great recession” has taken a significant toll on Millennials. In particular unemployment among the youngest half of this millennial generation has been considerably higher than among other age groups. Unemployment is historically somewhat higher among these age groups.

Millennials today are somewhat more likely to say they are Worse Off (30%) rather than Better Off (23%) from a year ago, however they remain generally optimistic about their economic future with 48% saying they will be Better Off next year and only 12% saying they will be Worse Off. Millennial viewpoints about wealth distribution in the U.S. are also changing. The 2012 Pew Research Values study found that 83% of Millennials believe that the rich are getting richer and the poor are getting poorer, this compares to 67% of those aged 65 and older who are saying the same. That wide gap between the generations is a change from the Pew Values study in 1987 when the percentages were 76% among the 65 and older group and 73% among Millennials. (See http://www.people-press.org/2012/06/04/section-2-demographics-and-american-values/) 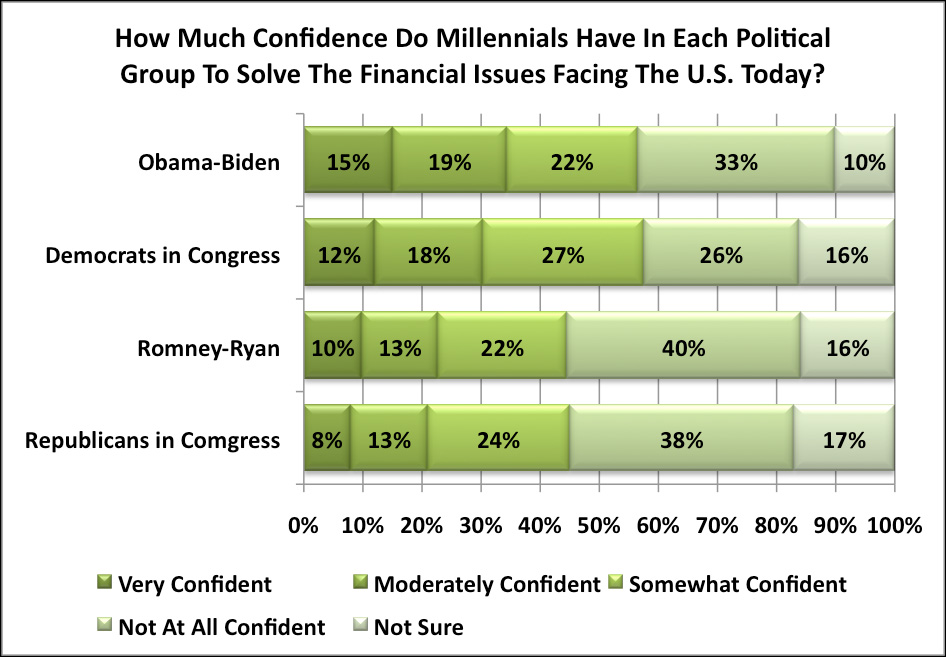 The political efficacy of Millennials measured by the percent who agree that they can have an impact on decisions made by government leaders has increased slightly from 2011, but remains low. Twenty-two percent of Millennials today feel they can Always or Most of the Time have an impact on decisions made by leaders; this is up from 15% a year ago. Trust in our political leaders in Washington has also increased slightly, but also remains low. Currently, almost a quarter (23%) feel they can trust government Always or Most Of The Time, compared to 18% in 2011. Those who feel they can Never have an influence on government fell slightly from 37% to 32% and those who said they can Never trust government remains at 23%. Millennials who are Not Sure about how to respond to these questions remains similar to last year (9% and 7% for 2011; 9% and 10% for 2012).

The 2012 iOme Measure of Millennials national survey finds that Millennials are increasingly concerned about their own personal financial situation, do not feel they can have much impact on the decisions that leaders make in Washington and do not have high levels of trust in our leaders in Washington to do what is right. These low levels of political efficacy and trust also produce generally low confidence in our political leaders to solve the economic issues facing our nation today.

The analysis in this report is based on a national online sample representative of adults aged 18-29 in the United States. The survey was implemented in partnership with Toluna research (www.toluna-group.com). The online survey was conducted August 21-24, 2012. The representative sample included 643 completed surveys. The sample was weighted to more closely match the overall demographics of this age group nationally. The questionnaire was designed and hosted by the St. Norbert College Strategic Research Institute (www.snc.edujsri) using Qualtrics software. Respondents for this survey were selected from among those who have registered to participate in Toluna’s online surveys and polls. The data have been weighted to reflect the age composition of the millennial generation. Because the sample is based on those who initially self-selected for participation in the Toluna sample rather than a pure probability sample, no estimates of sampling error can be calculated. All sample surveys and polls may be subject to multiple sources of error, including, but not limited to sampling error, coverage error, and measurement error.